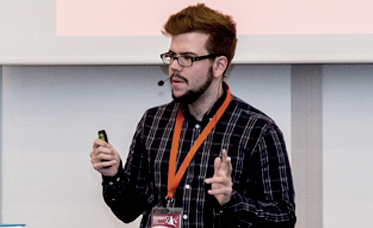 Our everyday lives are increasingly permeated with objects and devices that have computational elements within them, some obvious ones like smart speakers (e.g. Amazon echo), and some less obvious, such as alarm clocks. Going beyond the look and feel of an object, interaction designers follow a process that considers and defines how an object behaves when people interact with it. Currently, prototyping tools available support very basic state-based transitions, requiring designers to have additional training in programming, circuit building and form-giving, all of which require extensive expertise and time.

David’s research aims to empower interaction designers to rapidly prototype and test their ideas without needing to know how to program. He creates prototyping tools that enable using built-in sensors and outputs in mobile devices such as phones or watches, rather than custom-made circuits, to prototype smart objects. This enables designers to temporarily enclose these devices inside of fabricated forms (e.g. using cardboard or 3D printing) to author interactive behaviours. His tools support exploring, iterating and fine-tuning interactive behaviours (e.g. animations), and automatically generate 3D printable models to enclose the phone and expose the relevant inputs and outputs.

What or who inspired you to study this discipline?

David started working at the Interactions Lab (iLab) as an undergrad researcher with Dr. Saul Greenberg. He was inspired by the research that all of the students in the iLab were working on, and seeing how they integrated ideas from different disciplines, including design and social science.This encouraged him to add a creative component to his work, and transition from drawing ideas to building things that people could ultimately use. As a member of research networks, the lab participated in many collaborative projects across institutions on the topic of multi-touch technologies. David had the opportunity to work on several of these projects, which helped him establish a trajectory for his future research in his PhD. The iLab also afforded him the chance to continue working alongside experts with complementary research areas and benefit from their skills and experience.

David hopes his research can help shape the tools designers use to author new interactive behaviours, both for existing devices, and for emerging smart technologies. As a result, designers can have a lower barrier of entry to author interactive objects, pointing to possibilities for further innovation, and, of course, better designed products.He is also hopeful that he can inspire people to rethink how we can repurpose old smartphones. People often talk about putting their old technology in a drawer and forgetting about it, or have concerns about the environmental impact of cast-off devices accumulating in landfills. Harnessing old smartphones for prototyping can breathe new life into them.

During an internship at Autodesk Research in 2016, David worked with people whose research could become a commercial product. He had considerable freedom and support from his colleagues in pitching and leading a project there. In five months, they worked together to take an idea from paper sketches all the way to a functional prototype that tied together visual programming and 3D modeling to let people author prototypes repurposing their phones. This research project proved to be timely and relevant to the direction of the creative industry: two years later, Nintendo released Nintendo Labo, a game for the Nintendo Switch using cardboard constructions around the Switch tablet and controllers.

Being a Killam laureate was an honour that tells me my hard work is paying off and being acknowledged, and that I am on the right track. I immigrated to Canada 12 years ago from Venezuela. Latin Americans are a minority group in both academia and technology. I hope to encourage more Latin Americans to work in these fields, and demonstrate that we are capable of success and even excellence. This inspires me to continue teaching and sharing my knowledge with others, so that each generation is further ahead than the last. 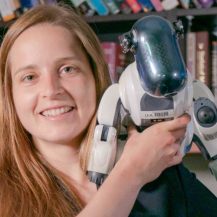 My primary research area is machine learning, where the goal is to understand and develop algorithms that improve prediction and decision-making capabilities with experience.