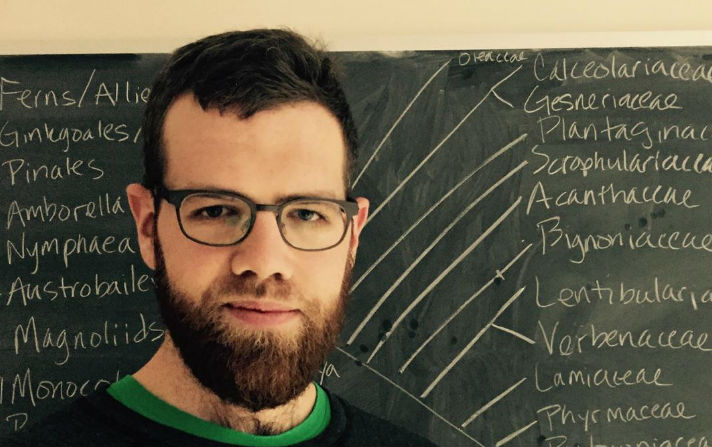 As an undergraduate Matt was inspired by a Peter and Rosemary Grant lecture on natural selection in finches on the Galapagos Islands.  Their lecture opened his mind to large scale questions such as why there are so many species in some groups and so few others and it occurred to him that these questions could be rigorously tested with data from the field.  In Matt’s own words:

“The Grants’ talk was pretty much the coolest thing I had ever seen. I was hooked: I read everything I could get my hands on and somehow convinced (tricked?) David Green, my ecology professor, into letting me work for him. In this job, I got to spend several months living in Revelstoke, B.C., and Inuvik, N.W.T. studying birds in the wild. And while I now spend most of my working hours on my computer, I am still motivated by the types of questions, ideas, and approaches that I first really encountered watching the Grants.”

Matt’s primary focus is on how processes in individual organisms “scale up” to create large scale patterns of biodiversity.  In order to look at this concretely, Matt studies the footprint of evolutionary processes in historical branching patterns connecting species to one another – creating “phylogenetic trees” that provide information about how evolution has unfolded over deep time.  Not only do these trees allow insight into the long term dynamics of multiple evolutionary processes working together, they can compliment other studies in which the time scale is much shorter.  Conversely, because the time scale of the phylogenetic data is so long many historical evolutionary details will be obscured.  Thus, one of the big challenges Matt faces is how to reconcile disparate types of data and observations at multiple time-scales to form a coherent view of evolutionary change.

The University of British Columbia was a natural fit for Matt who is “still blown away by the names on the doors as I walk down the hall.”  In fact, after one of his papers came out Matt was thrilled to receive a congratulatory message from one of his scientific heroes.  As a native Vancouverite, Matt had already began collaborating with Sally Otto, his postdoctoral advisor and was happy to come home. Most of all Matt appreciates the level of camaraderie and collaboration that exists across the research group.

When not studying or working Matt “nerds out” on other topics like history, economics and computer languages.  He also enjoys running, playing in a basketball league and of course relaxing . . . by listening to rap music.