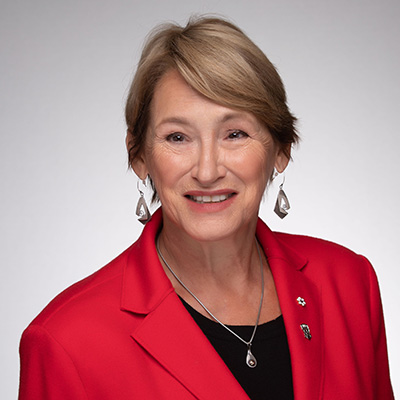 Suzanne Fortier served as Principal and Vice-Chancellor of McGill University from 2013 to 2022. Prior to her appointment as Principal, Professor Fortier was President of the Natural Sciences and Engineering Research Council of Canada (NSERC) from 2006 to 2013, and held the position of Vice-Principal (Academic) from 2000 to 2005 and Vice-Principal (Research) from 1995 to 2000 at Queen’s University in Kingston, Ontario, where she was a Professor in the Department of Chemistry and in the School of Computing (1982-2006).

Professor Fortier was appointed an Officer of the Order of Canada in 2018. She is also an officer of France’s National Order of Merit, a fellow of the American Association for the Advancement of Science, and was named a Specially Elected Fellow of the Royal Society of Canada (2015). She holds honorary doctorates from Thompson Rivers University, Carleton University, and the University of Glasgow.