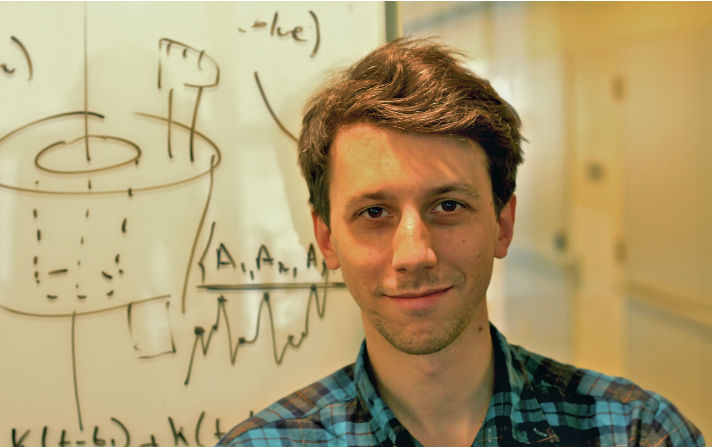 The collective activity of millions of neurons in the brain result in our thoughts, sensations, desires, emotions – our very ability to plan our life.  Understanding the organization of this neuronal activity in relation to behavior is the central question in neuroscience, and it requires a physical model that we can study. Adrien’s team studies the brain’s “GPS” in rodents – animals truly amazing at exploring their environments, avoiding dangerous spots and returning to their nest as quickly as needed. Anyone who has observed rats in the subway of Paris or New York will know what he is talking about!

As a master’s student, Adrien hoped to develop bio-inspired models of artificial intelligence, specifically navigational models that would indicate how an artificial agent could orient himself in the world and learn the unique combination of external sensory cues of a particular environment to plan trajectories within it. The related biological neuronal networks were just starting to be unveiled so to learn more Adrien visited a lab at the College de France in Paris where they were conducting neurophysiological recordings in the brain’s navigation system. He witnessed a sleeping rat being recorded and the screen was covered with brain signals that he did not understand.  From here Adrien’s innate curiosity led him to doing his PhD in that very lab, learning the experimental side of neuroscience.

Now a Killam Scholar at the MNI, Adrien considers himself lucky for himself and his family to have the opportunity to live and work in Montreal.  The Montreal Neurological Institute is the oldest, and certainly the most famous neuroscience institute in the world and Adrien is appreciative of the Killam influence on the facility, particularly the weekly Killam lectures, that provide opportunities for students, postdocs and researchers to hear some of the best science in the field and meet world renowned neuroscientists in person.

Some of my greatest ‘scientific heroes’ have worked at the MNI: Wilder Penfield, the founder, Donald Hebb even Brenda Milner, who I met in the line of the cafeteria my very first day of work at the Institute! She is 99, and still an active faculty member!

Adrien is continually captivated by the uncertainty of his research and the fact that researchers may never fully understand how neurons interact with each other to give rise to our mental life. The fact that a slight alteration in these networks can lead to debilitating brain disorders is something that Adrien confesses keeps him awake at night. He is determined therefore to focus on basic research and collaborations with experts in brain disease to apply the experimental and analytical techniques we use and develop in the lab to the study of neurological disorders.

A proud father of two, Adrien is almost as proud of the science he studies daily.  Uncovering that sleeping neurons are just as active as wakeful ones remains a significant breakthrough in his research.  When awake, brains do not process sensory information, sensory signals just interfere with spontaneously active neurons, whereas these neurons are just spontaneously active when we are asleep. By recording neurons in the brain’s GPS  of sleeping mice, Adrien and his team can even decode how the mice move in their dreams!

We also showed how the brain replays recent memories to consolidate them, especially the one that matter the most. To make a long story short: sleep on it!